[This the final in a series of four posts concerning my soon to be published Twelve Planets collection, Caution: Contains Small Parts. No spoilers, I promise!]

So, remember back when I submitted my three stories for Twelve Planets and promised Alisa that she’d have the fourth in due course?

Having sold the collection, I pitched Alisa the idea for the fourth story at WorldCon in August 2010, just to make sure she thought it would be a good fit before I started work in earnest. It was an idea that had been will-o-wisping around the less-travelled alleys of my brain for a couple of years — less an idea than the spark of something I knew I wanted to write about in some way. I thought I’d figured out exactly how only a few weeks before.

“Have you heard of Real Dolls?” I remember asking Alisa.

The expression on her face was inscrutable. I couldn’t tell if she hadn’t heard of Real Dolls, or if she had but wasn’t looking forward to hearing my idea involving them, or if she was simply waiting patiently for me to continue. If you don’t know Alisa well, and I didn’t back then, she pulls off inscrutable with aplomb. I’m sure she’d be a formidable poker player. (And if you haven’t heard of Real Dolls, or their ilk, you can look them up yourself. Google is very helpful. No, I’m not going to link.) In any case, I babbled somewhat about real dolls and my story idea for which I still had little more than the title — always a good sign — and the concept. Alisa asked a couple of questions then told me to go away and write it. Excellent, I thought, I’ll have this to her by the end of the year. Early 2011, tops.

I went away but didn’t start to write. Instead I dove headfirst down a rabbit-hole of research which proved both labyrinthine and bottomless, and from which I did not emerge for another twelve months or more. Normally, I like the research aspect of writing, I really do. Normally, I’m efficient and targeted. I go in, grab what I need in just enough detail to add texture, depth and verisimilitude, and get right back out again. Not so in this case. I bought books, downloaded documentaries, and perused more websites than I care to think about. I drilled down through 50+ pages on Google searches, chasing links. I followed tangents away from the core of my story on the flimsiest pretext. And I bent the ears of way too many indulgent friends and acquaintances with revelations of some of the skeeviest stuff I turned up. In short, I became obsessed with my research … which, when you consider that “The Home for Broken Dolls” is itself concerned with sex doll obsession, starts to get kinda meta. I did stop short at buying a second-hand Real Doll. But only just.

Finally, after one too many jokes from my husband about all the porn sites that would be racked up in my browser history, I pulled myself away. Or, at least, I started to write the story. The research continued almost until the end. At one point, after searching for a particular kind of website which I knew had to be out there, but really hoped was not, I stumbled across a gallery of images that had me sitting in furious, horrified, validated tears on my office floor. It was enough. It was too much. My head was full and I needed to sort through it all and decide exactly what did and didn’t belong in the story.

I wrote “The Home for Broken Dolls” in fits and starts over a period of twelve months. I kept having to put it aside for various reasons — a novel to copyedit, a promised short story to turn in, a novel to proof, various personal concerns — and in my head it kept getting larger. The word count for the Twelve Planets collections was meant to be capped at 40,000 words. I’d already turned in well over 20,000 with the other three stories. Luckily, Kaaron Warren had included a massive novella — “Sky” — in her collection, which definitely saw it exceeding the cap, so I hoped I could get away with a little extra as well. Still, I wanted to keep the final novella below 20,000. It’s the first time I have ever hit the word count wall with such unmitigated force.

After I’d written around 8,000 words and realised I wasn’t even a quarter of the way through the story, I panicked a little. I couldn’t finish “The Home for Broken Dolls” inside the word count. I had no ideas — and no real time — to write something else to finish the collection. I was screwed. Worse, I’d screwed my publisher who, by that point, had been exceedingly patient with me. I panicked a lot. Then I picked myself up, sat myself down and stripped those 8,000 back as brutally as I could, removing every single word I could get away with and have the thing still make sense. Which became SOP for writing the rest of the novella. I’d write a scene one session, then pare it right back the next time before allowing myself to continue the narrative. At 15,000 words I faced up to the fact that there was a whole third element that wasn’t going to make it into the novella. Which meant, I had no ending. Screwed, screwed, screwed.

Panic. Pick self up. Sit self down. Fix it. Fix it now.

And so, because I’m a fucking grown up writer, I did. I worked out a new path to the ending, a perfect ending for what the novella had become, and I got there. I sent it to Alisa just after New Year’s 2013. She was on her honeymoon and I told her not to read it until she got home. It wasn’t a honeymoon story. Later on, she thanked me.

“The Home for Broken Dolls” is still the most recent thing I have written, what with the six months sabbatical I’m currently enjoying. I have a lot of ideas working over in my head right now, but haven’t committed words to screen just yet. It will be interesting to see what my natural style has evolved into once I start at the end of this month. I don’t think it will be as pared back as the writing in this novella, but I don’t think it will go back to being what it used to be either. One thing about such sparse writing: it gives you nowhere to hide. Which is exhilarating and terrifying all at the same time. I’m keenly interested to see what people make of “The Home for Broken Dolls”, both because it’s new and because it’s a piece of which I’m particularly proud. I love this novella, I love Jane and I love my fierce, beautiful dolls. It was worth every bit of research I did — even the bits I didn’t end up using.

Yet. The bits I didn’t end up using yet. I say that because, six months later, this story is still very much live in my head. The dolls haven’t gone away, haven’t faded as is usually the case once I’ve finished a piece and am on to thinking about Next Things. Maybe this means I’m not done with them, or they’re not done with me. Same difference. “The Home for Broken Dolls” was a short story that became a novella … but what it really wanted to be all along was a novel.

Yeah, I see myself saying one day, about that. 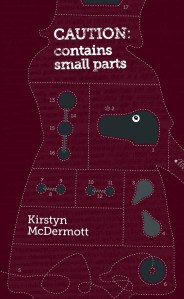 My Twelve Planets collection, Caution: Contains Small Parts, will be launched by Talie Helene at Continuum 9 in Melbourne, so if you’ll be at the convention, please come along and help me celebrate :

Naturally, if you can’t make it to the launch, you can always purchase the book direct from Twelfth Planet Press. It’s available right now for individual pre-order or as part of the Twelve Planets subscription.