She was my first cat. There had been several family cats growing up (one of them more “mine” than the others), but she was the first I’d adopted as an adult. The first for whom I had full responsibility. My First Cat. She was almost twenty years old and I’d said that when she got to twenty, she would henceforth be known as The Venerable Smudge. Contrary to the end, she decided that venerable wasn’t her speed.

We let her go this afternoon. She’d had a good last month, after we got her on cortisone tablets to help counter whatever it was growing in her belly (I still maintain it was probably an over-inflamed spite gland), and she had a very good Last Day.  There was a bit of medium-rare steak for dinner! There was sleeping in our bed overnight! There was fresh shower-water in the morning! But she was weak and wobbly and could barely stand or walk without falling over, and I decided to spare her the heat wave of the next few days which would likely have finished her anyway.

She was done, my cat.

Sometimes, responsibility is the worst.

The vets were wonderful. They came to our home and she passed her last moments on the couch where she spent so much of her days and nights, with us by her side. She was tired and slightly dozy but still very much herself. It was the last thing I could do for her, and I’m deeply grateful to have been able to do it.

She had acquired many names over the years. Smudge, of course, and Smudgie, and even a handful of ostentatious extensions: Smudgie La Rue; Smudge-a-roonie of the Roonies; Smudge-a-rooster. She was Fluffbot and Black Cat and Tiny Cat. She was Honey Bear, with Bear for short or Bear-ba-loo for long, and she was most recently TBC — Total Best Cat. She was also, according to my beloved, the Varmint. And, damn it, she was The Venerable Smudge as well.

After we buried her in the garden, we walked around the side of the house and saw an unusual cloud formation above the garage. A couple of soft, blurry clouds, smudged around the edges. If I squint, I can almost imagine it’s a little white moustache floating up there in the sky. 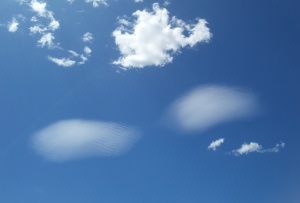 Humans are funny creatures. We fall irrevocably in love with small furry animals and take solace in the random patterns of clouds when our hearts are breaking.

My first cat, now and always. My Smudge. I miss you so much.