Back in January, when I wasn’t blogging, one of my perpetually open tabs was this post by Jim C. Hines in which he attempted to reproduce the ways in which females are often posed on genre book covers. His conclusion was that:

My sense is that most of these covers are supposed to convey strong, sexy heroines, but these are not poses that suggest strength. You can’t fight from these stances. I could barely even walk.

Bouncing off a recent Tor.com article about that pose — Tits AND Ass, Let Me Shown You Them — and how there really is is no male equivalent, Jim has now reproduced some book cover poses where (it was suggested, mainly in the Tor.com comments) males are sexually objectified. His conclusions this time around? 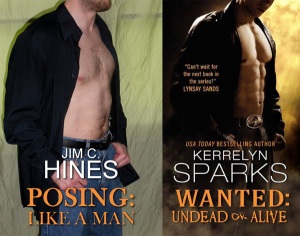 He also suggests checking out this post by LJ user genrereviews wherein she recreates side by side comparisons of male and female poses, with detailed and enlightening commentary.

These are both fantastic resources and ones I want to point out to everyone who’s ever said to me, “Stop bitching about how women are represented in covers/movies/comics/art/advertising because men are also sexually objectified, dontcha know? It’s just the culture! We’re all obsessed with sex!” If you’re one of those people, you need to have a good look at what Jim Hines and genreviews have done and take special note of what they say about how recreating those poses made them feel.

You might also want to brush up on the definition of false equivalence, most effectively explained here in the Shortpacked webcomic by David Willis. Just don’t read the comments. Or do. Just don’t blame me for your blood pressure. Or the resulting head-shaped indentation in your wall.