I’ve been fairly disappointed by most of the movies I’ve gone to the trouble to see on the big screen lately. Avatar, Holmes, The Lovely Bones, among others … all big budget productions with effects up the whazoo but all falling down, to greater and lesser extent, in terms of plot and execution. (You remember what “plot” is, don’t you? Thought I’d ask because James Cameron, apparently, does not.) But I do wonder how my level of anticipation influences my experience of a film. If I go into the theatre thinking, this will absolutely brilliant, am I bound for disappointment more often than not? Should I just sit down with my boysenberry choc-top and think, okay, this will be mildly entertaining at least and, oh look, air conditioning, and take anything above that as a bonus? Am I suffering from the malady of great expectations? 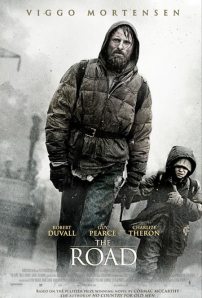 No, I think not. Because last Thursday I saw The Road, directed by John Hillcoat from a screenplay by Joe Penhall. The movie is based on Cormac McCarthy’s Pulitzer Prize-winning novel of the same name and the adaptation of the source material is nothing less than masterful. Subtle, faithful and unflinching, with just enough tweaks as were necessary to bring McCarthy’s bleak yet ultimately hopeful story to the screen.

As a novel, I love The Road. It was the first book in a long time that pulled me in so immediately and so powerfully that I found it hard to put aside. I fell asleep late the first night I started it because I simply could not make myself stop reading. It’s a book I recommend to everyone and one that would easily skate into my Top 100 Books Ever List, should I ever decide I have the time to waste in making one. Possibly even my Top 10 List.

Now, I’d heard very good things about the movie from its bumpy and ill-handled release in US cinemas last year. I greatly enjoyed Ghosts of the Civil Dead and The Proposition (two of Hillcoat’s other films) and I’ve seen Viggo Mortensen in enough varied roles to feel confident he could play the Father without any trouble. So I went into cinema with very high expectations indeed. Expectations which were met in spades. The Road is a beautiful, disturbing and vitally important film. It shows us the post-apocalypse as it will be, not how we often like to fantasise about it. No zombies, no flame-throwers, no hiding out in shopping malls or amusement parks, no fun and no wisecracks. Just survival and the brutal, human need to believe that there is something worth surviving for, even if all evidence points to the contrary.

The Road is a near perfect film on all levels. The screenplay doesn’t miss a beat, the direction is elegant and the performances from the entire cast are complex and beautifully understated. The cinematography and the score exquisitely capture the look and sound of a world very much on its knees.

I’m a book person. As much as I enjoy film and television, I’ll almost always take words over pictures. With this bias, I’m often wary of adaptations. At best, they usually offer little more than a visual synopsis; at worst, they feel like they’ve torn the heart out of a much loved story. However, The Road is one of those very rare films that I love equally as much as the book. Let the Right One In is another, as is Fight Club. You need to see The Road, if you haven’t already. Don’t even worry about reading the book first —  in a way, I kind of envy you the tabula rasa experience.

(By the way, the fact that it didn’t get an Oscar’s Best Picture nomination? When there were TEN slots to fill this year? It’s a bloody disgrace and an embarrassment to the Academy, or it should be. I mean, seriously. Avatar? For best picture? Perhaps the apocalypse isn’t so far off in the distance after all.)