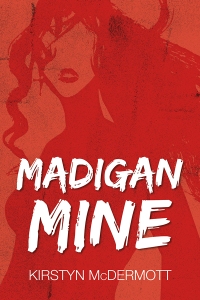 When Alex meets Madigan again everything changes. His childhood sweetheart is beautiful and impulsive, but there is something wrong with her. Something dangerous.

Then she commits suicide.

Now Alex can’t get Madigan out of his head. Is it all in his mind, or is she communicating with him?

To save himself and those he loves, Alex must uncover the sinister reason why Madigan took her own life – and why she won’t lie still in her grave.

‘McDermott’s characters are psychologically complex and precisely observed … It’s a well-crafted debut, with an imaginative twist, that horror fans won’t be able to put down.’

‘This is a masterful debut novel by Kirstyn McDermott, written in crisp, clear prose that captures the possessive relationship of the easy-going Lexi and the strangely beguiling Madigan in a chilling and yet, for a supernatural narrative, oh so real way.’

‘McDermott’s writing is rich, each word seems deliberately evocative, conjuring up a tangible reality. It’s writing that demands to be noticed, that demands control over your imagination.’

Sean Wright, Adventures of a Bookonaut

Madigan Mine is Kirstyn McDermott’s debut novel and was originally published by Picador in 2010.

It has been nominated for the Australian Shadows and Ditmar Awards and was the winner of the 2010 Aurealis Award for Best Horror Novel as well as the Chronos Award for Best Long Fiction.

Madigan Mine is available to purchase from Twelfth Planet Press in digital format.

The ebook is also available from:

You can also purchase a SIGNED copy of Madigan Mine (Australian trade paperback edition) directly from me simply by clicking on one of the following PayPal buttons. If you want to send the book to someone as a gift, I’ll be happy to include a personalised message to them as well — just leave a note in the PayPal comment box as you process your payment or send me an email.

AUSTRALIAN BUYERS:
Purchase a signed trade paperback of Madigan Mine for
$19.95 including postage (within Australia):

INTERNATIONAL BUYERS:
Purchase a signed trade paperback of Madigan Mine for
$29.95 including postage (anywhere in the world):

Read reviews or add Madigan Mine to your shelf on Goodreads:

7 thoughts on “Madigan Mine”