Because it’s not enough to criticise when Wrong Things Are Wrong; we also need to offer kudos when they are indeed due. As for example, this excellent cover for Ann Aguirre’s new novel, Endgame: 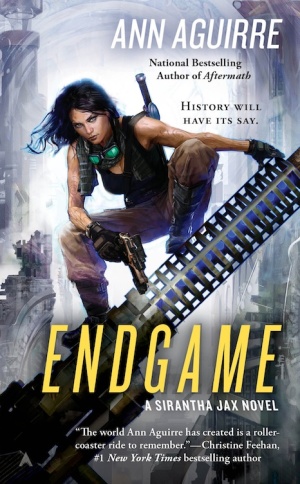 What a magnificent pose. An action-oriented female character who immediately presents as being strong, confident, physically capable and physically aware. An unquestionably female character who, yes, possesses both butt and breasts, but is not concerned with making them the centre of your attention. Because she is, after all, much more than the sum of her parts. A female character who snares you with a sharp, intelligent gaze and challenges you to read her story. Or not, because she actually has more important things going on in her world than caring about whether or not you are watching her.

I could go on about how much I love this cover, and why, but come on … just look at it!

I will point out that I’ve never read any of the Sirantha Jax novels but, hot damn, I really, really want to get my hands on them now. Which, you know, is exactly what a good book cover is meant to inspire in a reader. Well done, that illustrator there!